William and Adeline were married in Padang, West Sumatra, on 18th June 1864. Adeline was born in Padang on 19th September 1836, and died in Batavia (Jakarta), on 23 May 1926. Adeline was the daughter of John Butter Maidman and Johanna Maria Terhoeff.

William and Adeline had one child, a daughter, Letitia Wilhelmine, born in Padang on 31st March 1865. What happened next is open to conjecture, but just over a year after Letitia’s birth we find William and six children from his marriage to Clementina boarding the “Netherby” in London bound for Brisbane.

We must assume that the “Mrs William Townsend” referred to in the Brisbane Courier's Social Gossip column in 1896 is Adeline because of the length of residence in Jakarta, the reference to “her daughter and grandchildren” and that Mr G R Townsend of Indooroopilly is is identified as her step-son. Clearly, cordial relations were maintained with at least part of the family. A look at William’s will could also reveal a reason for the visit. 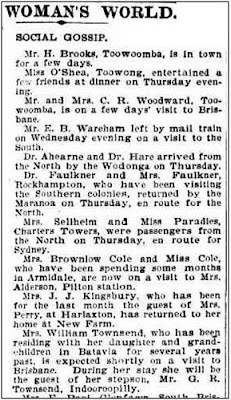