The Voyage of the "Netherby"

For a start, let's list some of the more informative internet resources concerning the voyage and wreck of the "Netherby".

http://netherby.homestead.com/ is an excellent site, giving personal accounts of events, and includes many other details. In particular, the passengers' letter of thanks to the captain, with a long list of signatories including those of interest to us:
Thomas. E. (Elizabeth Salmon Thomas)
Townsend, E.J (Edwin James Townsend)
Townsend, G.R (George Robert Townsend)
Townsend, M.C (Mary Catherine Townsend)
Townsend, T.R (Transcription error - Isabella Rachel Townsend)
Townsend, Wm. (William Townsend)
Victor Louis Townsend, at 10 years of age the youngest of the Townsend group, was probably considered too young to sign.

http://www.kingisland.net.au/~maritime/netherby.htm shows an artist's impression of the wreck, and a map of King Island with the wreck site.

There is much more on the internet, but usually giving less detail than these. Now for the newspaper clippings. The wreck of the "Netherby" was the big story of July and August 1866 in the "Argus" and, to a lesser extent, the "Sydney Morning Herald" and the "Brisbane Courier". After looking at the vast number of stories available at the National Library's Digital Newspapers on-line collection of newspapers, I've decided that the "human interest" stories might be better here, rather than the large reports on the circumstances of the wreck itself. The main reason is that the longer reports require a lot of fiddling about to get the images into a form that could be uploaded to the blog, but also because much of the reporting is repetitive. Readers who wish to know more can visit the site, search for "Netherby" and filter the results by "1860-1869", "1866", and "July" or "August".

So, here are the clippings I selected, starting from reports of the imminent departure of the "Netherby" from England, and finishing on 10 August 1866 with a letter from some of the newly arrived immigrants in Brisbane.

I find it amazing that, for the era and the distances involved, the Colonial Governments and the various communities were able to act in such a timely fashion that all the immigrants were able to be settled, in some fashion or other, in less than a month after the wreck. Remember, much of that time was spent awaiting rescue from King Island.

(For better viewing of any image, click on the image or, better, right click and open in a new window or tab, depending on your browser.) 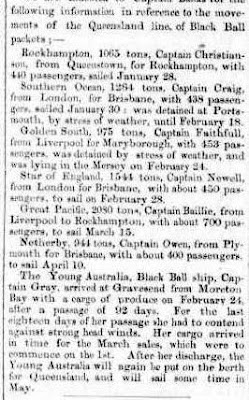 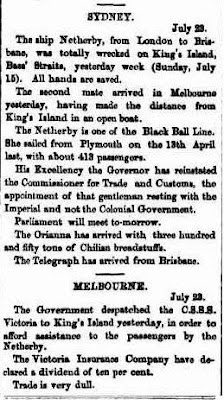 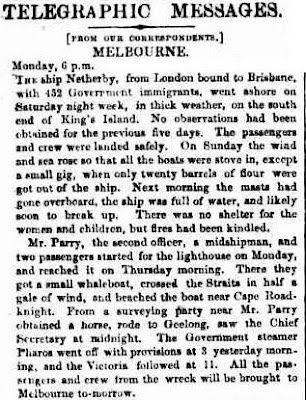 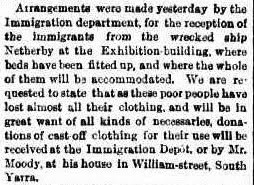 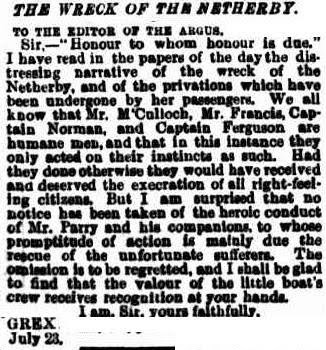 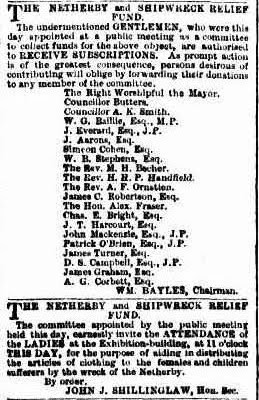 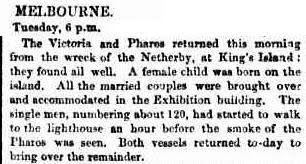 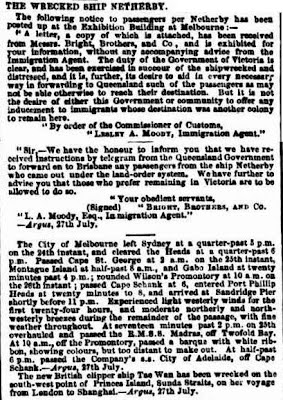 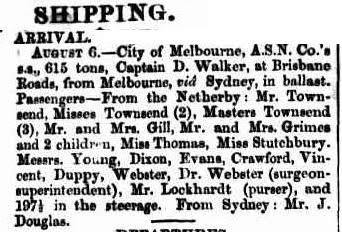 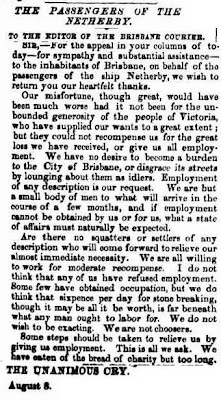 Letter, Brisbane Courier, 10 August 1866.
We should also note here that Captain Townsend was one of the co-editors of the "Netherby Gazette", the first published account of the voyage and stranding.
Posted by Geoff_D at 4:35 PM