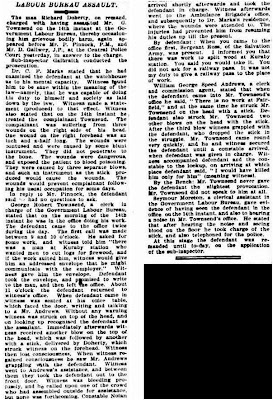 Brisbane Courier, 27 April 1898
(Click on the image to view larger, then "Back" to return to this page.)
George Robert Townsend married Jessie Jane Sinclair in 1881. Jessie was born in Sydney in 1858, and died in Wooloowin on 29th July 1933 (Probate application notice, Courier Mail, 2nd April 1934). She was the daughter of John Sinclair and Jane Kellarman. They had two sons, Edwin Alexander Sinclair Townsend (1882-1913) and Noel Sinclair Townsend (1890-?). George Robert was buried in Lutwyche cemetery on 29th August 1917. Jessie Jane was also interred in Lutwyche Cemetery on 31st July 1933, along with her son, Edwin Alexander Sinclair who was buried on 10th December, 1913. The 1925 electoral roll has Jessie Jane at "Urndy Ridge", Lutwyche Road, Wooloowin.

We know from the obituary of Edwin James that George Robert Townsend had been a member of the Native Police, but had left to become a public servant in the Immigration Department (1895). We also know from the social columns that he was living in Indooroopilly in 1896. The report above, from the Brisbane Courier of 17th April 1898, states that he was "clerk in charge of the Government Labour Bureau".

Noel Sinclair Townsend was a grazier at Roma when he enlisted in the Light Horse in November 1916. An extensive service file is accessible from the National Archives, which gives some clues to his life. 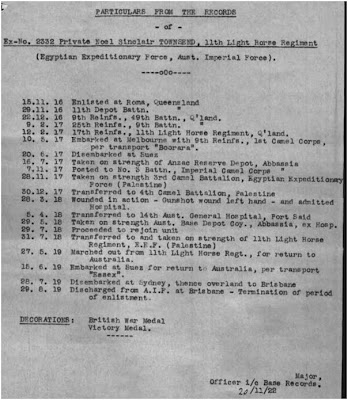 Summary of Noel Sinclair Townsend's service, 1916-1919.
Source, National Archives.
His mother’s address at the time of his enlistment, and later, was “Wyndyrydge”, Isedale Street, Wooloowin. We know, from letters written in 1922, that he had attended Brisbane Grammar School. These letters were written by A J Sinclair, a principal of Topikads Limited Incorporating Cartoon Filmads Queensland, of 14 Strand Buildings, Queen Street, Brisbane; “Cinematograph Advertising for Good Theatre Screens”.

In 1913, Noel Sinclair Townsend was living at McLennan Street, Wooloowin, occupation overseer. In the same household were his parents, George Robert (public servant) and Jessie Jane Townsend and his brother. By 1919, Noel had moved to Lyndale, Roma, and was listed as a grazier. In 1923, he married Elizabeth Crichton Stark.1925 sees him at West Cooroy, as a banana farmer. He is listed on the electoral roll for 1936 as a fruit farmer at Beerwah, with Elizabeth Crichton Townsend. In 1937, a change of occupation to dairy farmer, and living at Goomboorian, Tiaro, where they are still residing in 1943. Noel and Elizabeth appear to have had a daughter named Clare, according to the 1949 rolls, when they were living either with or near Edmund Ernest Townsend. Noel and Elizabeth appear to have retired to Tin Can Bay by the time of the 1954 electoral registrations. In 1954, Clare is a nurse and is residing at 27 Caledonian Hill, Gympie.
Posted by Geoff_D at 1:06 PM