Brisbane Courier, 1 August 1874
Mary Catherine Townsend married Robert Rickards Davidson, son of Robert and Sophia Elizabeth Davidson, on 29th July, 1874. At this stage, Frances had not been born but Letitia had, so Mary Catherine was not really the youngest daughter of William Townsend. Robert Rickards Davidson appears to have been associated with the Volunteer Artillery, being Hon. Sec. of the battery in 1870. He also seems to have been Hon. Sec. of the Brisbane Football Club in 1870-71 and beyond. In 1880, he was signatory to a petition requesting the establishment of a Shire of Toowong.

A report in the Brisbane Courier, 11 February 1899, has Mrs R R Davidson returning from Townsville to reside in Brisbane, presumably after R.R. Davidson's death. In the intervening years, the Courier shows that Mr and Mrs R R Davidson were socially active, especially in the Townsville area during the 1890s.

No burial sites in Brisbane have been found for Robert or Mary Catherine. It is possible that they are both buried in Townsville or thereabouts. 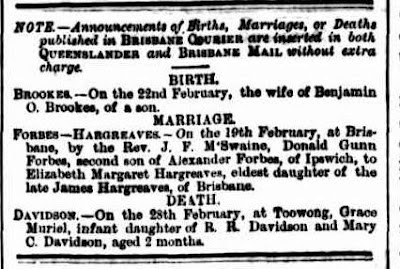