Readers of the blog will know that the Elink Schuurman family is connected to the Townsends. A certain Tom Elink Schuurman, who appears to be a descendant of a brother of Henri Maximilian Elink Schuurman, husband of Maria Augusta Townsend, was Dutch East Indies Consul General in Australia before World War Two. Nora Heysen won the 1938 (announced January 1939) Archibald Prize for her portrait of Madame Elink Schuurman. 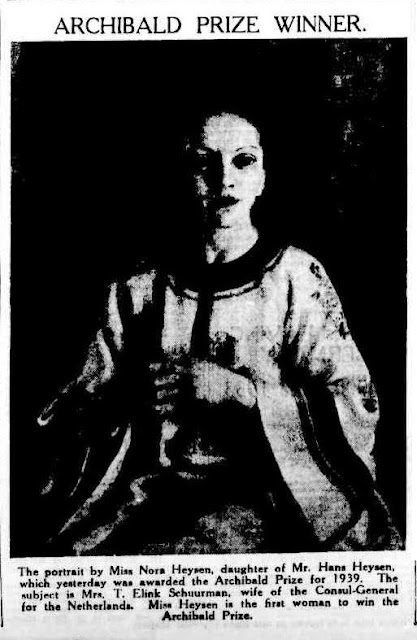 This is the best copy of the portrait that I have been able to find so far, from a newspaper of the day.

In trying to find out more  about the portrait, I came across this newspaper report from July 2005. It states, in part:
"But after months of research, Ms Hendriksen has been unable to trace Heysen's most famous work - her portrait of Madame Elink Schuurman, which won the Archibald in 1938.
"Usually you can track paintings of this quality pretty easily," she said. "Either they are bought and sold at auction or there is some trail, some provenance. But, in this case, nothing. It has just disappeared."
The work, Ms Hendriksen said, was "a wonderful portrait, a quintessential early-modernist piece with a classical structure and a treatment of textiles that still maintains a freshness". Or at least, it would if she could find it. She has searched all the major private and public collections in Australia, sought help from the Heysen family and followed countless false leads. But there is no sign of the painting, no clue to its fate - though she has heard unsubstantiated rumours that it ended up in Spain."


Now, photos in the pre-war newspapers include at least one in which the young Elink Schuurman children featured. One of the children was named Henri, like many of his forebears, and his older sister was named Marcel, Marcelle or Marcile. Searching for Henri Elink Schuurman on the internet tells me that one person of that name, an ex-diplomat, lives in Spain.

Is he the son of Tom Elink Schuurman and does he have a valuable and much sought-after portrait of his mother? I wish I was in the position where I could just up stakes and head off to Spain to check it out.

Note: More searching tells me that Madame Elink Schuurman (no forename yet) was the daughter of Dr & Madame P M Lambert of Shanghai and Paris. The Elink Schuurmans married in 1933.

The caption to another photo reveals that Marcel was born in Holland and Henri in Singapore.
Posted by Geoff_D at 1:19 PM